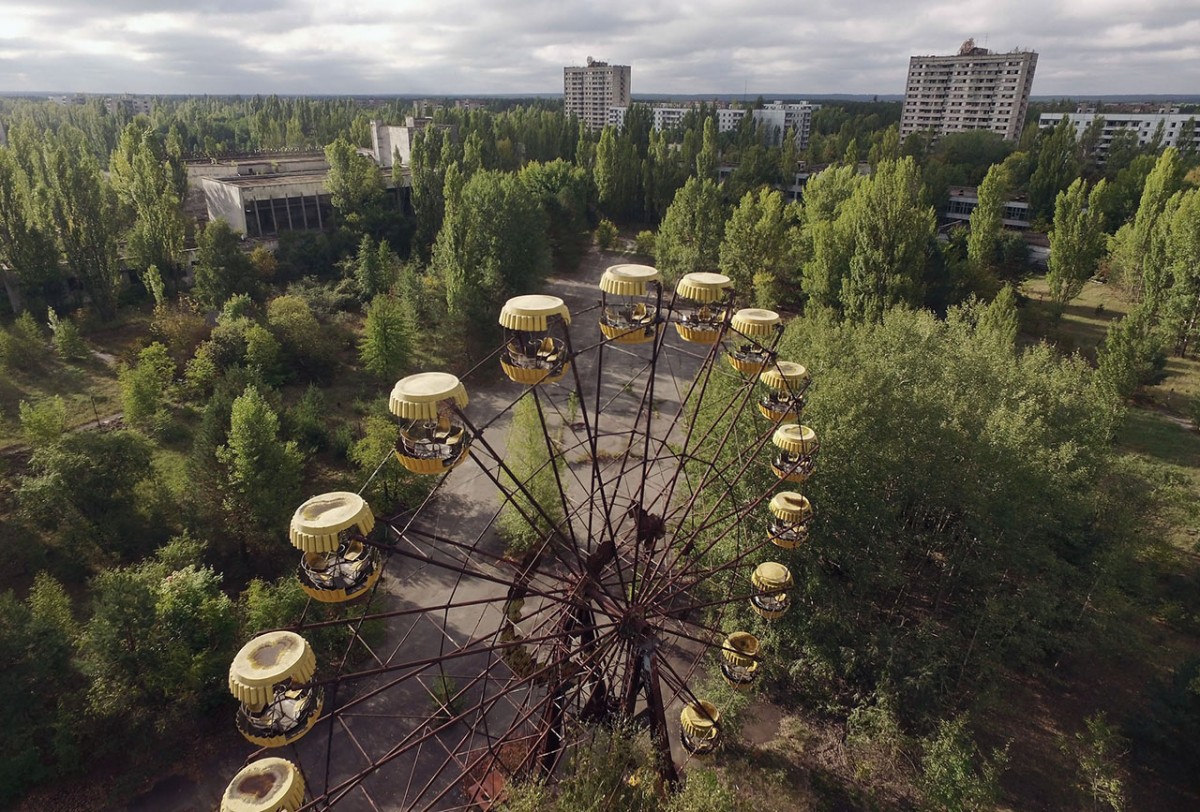 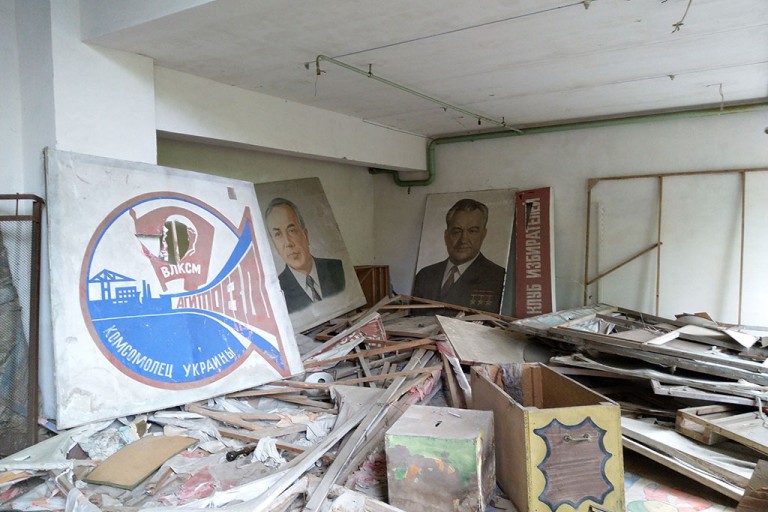 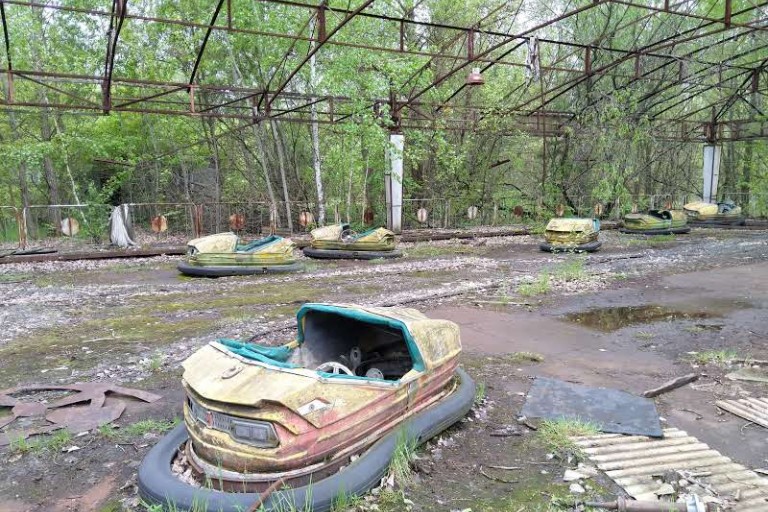 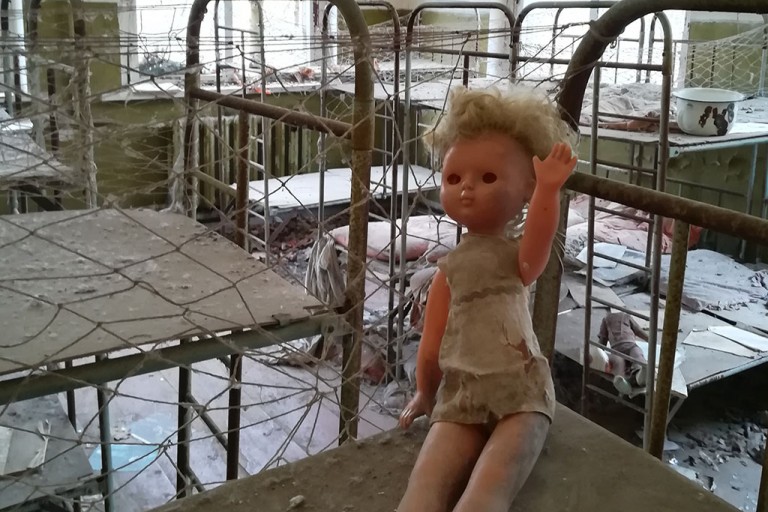 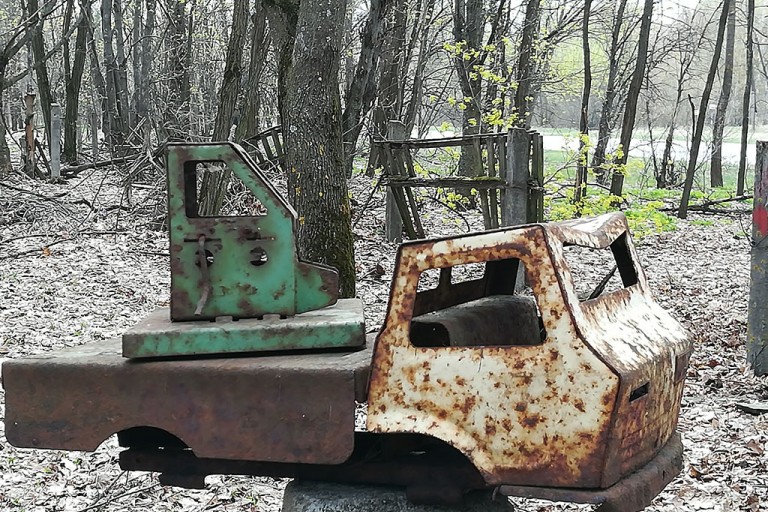 When did Chernobyl happen?

April 26, 1986, at 1:23 a.m. the peaceful city is lying in a deep slumber as a shining plume of smoke rises from the shattered roof of the reactor just 2 km away off the densely populated area. The nearest Paramilitary fire brigades are put on high alert with all officers corps rushing to fight with “the fire on the roof of the 4th reactor”.
1:30 a.m. – the first brigade under the command of lieutenant Volodymyr Pravik arrives at its destination to see the gaping maw of the trashed nuclear block. They enter the engine room or what was left of it to localize the rampaging fire. Officers can hardly see anything in the cloud of glowing mist here and there illuminated with sizzling wires, the men feel a strange metallic taste in the mouth and a wave of nausea comes over them. Some firemen crumble to the ground from exhaustion.
1:35 a.m. – the next squad under the command of lieutenant Viktor Kibenok reaches the most damaged site of the 4th reactor. Later laypeople will claim indignantly “the firefighters just had no protective gear”. But what on earth could save from gamma radiation when a needle on the Geiger counter swings right off the scale?
Unfortunately, it is not the beginning of a Hollywood thriller… It was the first minutes of the worst nuclear disaster the world had ever known – the Chernobyl power plant disaster. The 4th nuclear reactor of Chernobyl NPP exploded. By 3:22 the fire was localized and 7 firefighters hospitalized. All of them received lethal doses of radiation. The lieutenants were awarded the title of Hero of the Soviet Union posthumously. However, we are to recognize as heroes all the first responders. They stopped the fire, which would have otherwise jumped on the third, second and first reactors causing a chain reaction and even a more disastrous explosion. According to specialists’ calculations in case of this catastrophe, the whole of Europe would have been deemed uninhabitable.

Last Friday I was standing in a ghost town of Pripyat. The silence I have never experienced before was deafening. Nevertheless both in Pripyat and Chernobyl radiation levels have significantly dropped since April 26, 1986, my Geiger counter wouldn’t cease beeping. So our instructors suggested that we should increase the maximum allowable radiation level on the dosimeters. I knew that a one-day exposure to 0,05 μSv wouldn't do any harm since the total dose eventually equals the one received during a 40-minute flight. This unusual sound was spooky though. In fact, the only dangerous place in Pripyat with alarmingly high doses of radiation is the local hospital, which admitted the first victims, among them - the firefighters. Their clothes are still lying in the basement and emitting about 360 μSv per hour (1000 times higher than normal natural background radiation!!!)
Guided by instructors we were led along the safe roads and paths with the lowest radiation possible in the exclusion zone, past the abandoned and decaying houses, kindergartens, schools, cinemas, grocery stores, along the empty grass-covered streets. Once our instructor went several metres off the safe road and started stepping carefully on specially placed stone blocks trying not to touch the soil. As he was holding the Geiger counter a few centimetres above the ground, it squealed and showed 23 μSv (the sanitary norm of natural background radiation in Kyiv is 0,016-0,03 μSv). The spot proved to be located right under the eaves of a stone house. When in 1986 liquidators were washing off the radioactive dust, it slid down the tiles. Then it was covered by soil and has been since lying several centimetres below the surface.
Few people know that the Chernobyl accident actually happened near Pripyat, so the latter suffered most of the consequences. Chernobyl today is a functioning city and has a population of 15 000 people, whereas Pripyat will never recover. As long as time goes by, it will be a silent witness of nuclear power hazard. Although 33 years have passed since the Chernobyl disaster, the cause of the explosion remains dubious. All theories included, the cause of the tragedy was attributed to human error, construction mistakes or even deliberate actions to clear an official’s reputation. It seems we will never find out the truth. The only tangible thing we have are facts, consequences and hopefully a lesson learnt. I just want to tip my hat to the heroes and commemorate their bravery with this short reflection on the Chernobyl disaster. 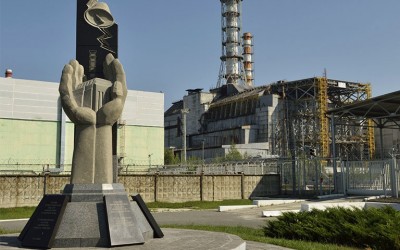