Cycling tour in the Carpathians 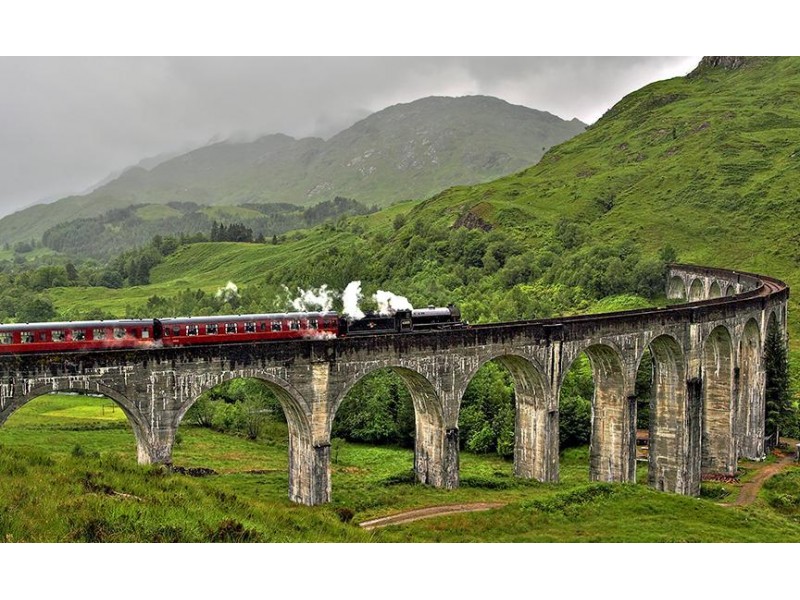 In the morning we arrive in Ivano-Frankivsk by train and transfer to Mykulychyn. Move into green tourism country estates and meet other participants after breakfast. Having been introduced to the safety rules, embark on the bicycle ride to Hook Waterfall along the "Presidential" route. Our next stop is Vorokhta village with its long stone bridges, also known as viaducts, built during the Austro-Hungarian Dual Monarchy in 1894. Besides, in Vorokhta village adrenaline junkies can try a zip line, which allows you to fly 700 meters above the surface. With the best impressions from adventures we’ll return to Mykulychyn.

At the end of the day pay a visit to Mr. Yurii for the honey, wine, liqueur and Carpathian herbs and roots infusions tasting event.

Hook Waterfall. The Carpathian locals call every waterfall a “hook” or “huk” in Ukrainian meaning “loud” and that its sound can be heard from afar. It is an extremely beautiful place only in a few kilometres from Mykulychyn. Take unbelievable photos on a narrow road along the stream. The Zhenets river falls from the height of 15 metres causing the loud sound. Distorted geological rock layers add some kind of mysticism to the waterfall.

The railway arched bridge (viaduct). This is one of the oldest and longest stone arches in Europe (130 m in general, while the length of one of the arches equals 65 m) situated in Vorokhta. The famous railway bridge was built in 1894 and functioned until 2000. There is also the Nativity of the Most Holy Mother of God church of the XVII century in Vorokhta, which is one of the oldest wooden temples preserved until today. It was built in 1615, when Vorokhta was still a part of Mykulychyn village. Perfect proportions and harmonious shapes make the church stand out among other similar types of local temples.

We wake up early in the morning to set off on a trip to Yaremche shortly after breakfast. Today you’ll see Probiy Waterfall, visit the deer and wild board enclosure, Divochi Sliozy Waterfall and the Monastery of Illia the Prophet. Don’t waste a chance to drop by the souvenir market, see the majestic rocks embellished with gothic folds, which look like a gigantic elephant. After the journey, return to our residence to have a rest.

Probii Waterfall. The most fascinating place in Yaremche is the eight-metre stepped Probiy waterfall with a pedestrian bridge on the top. Visit the local market near the bridge to find various souvenirs made by Ukrainian craftsmen. Walk to the other side of the river to find the Hutsulshchyna Restaurant, which is considered a true architectural monument. Head towards the Dovbush rocks following the trail bearing the same name, which runs from the outskirts of Yamna village. Local rocks and caves are echoed by legends about the famous leader of the Opryshky, the participants of  the national rebel movement.

The day starts with breakfast. Today is a halfway mark of our tour (most tourists stay for five days). Have some rest today, because tomorrow you are going to climb mountains. For now, take a ride just for the hell of it to the most modern ski resort in Ukraine, Bukovel. We make a stop in Tatariv at the fraternal grave of Austrian soldiers with the First World War monument. At Bukovel you’ll have 2-3 hours of spare time for entertainment activities. The ski lift takes you to the sightseeing platform, where you can enjoy the magnificent view of Hoverla and the mysterious Horhans. Then, we can go down the Bukovel slides. In the warm season you will have a possibility to swim in the lake. Until May it is skiing off-peak season in Bukovel, so you can leave bicycles, rent a ski and race downhill.

Bukovel. The youngest and most developed ski resort in Ukraine. Here you can find a bike park, three biking tracks of different complexity levels with a total length of about 11 km.

We have a fast breakfast, pack up and head to the train station.

At 10:00 a train leaves to our next destination. The route covers the old Polish-Czechoslovak border at an altitude of 1000 m stretching towards Berkut mountain pass. Prep the cams and enjoy a memorable high-speed downward journey.

Drop by a large souvenir market at the mountain pass, which is well known in the Carpathians and throughout Ukraine. Here you can buy unique products from leather, fur and wool, ceramics, metal, wood handcrafted by local artisans.

After breakfast we will cycle to the storybook place of stone and water – Prutets-Chemehivskyi River canyon. It is worth lingering in the canyon, crawling around the large boulders and rocks covered with moss of various colors. If the weather is good enough, you can swim in the waters. From this very point, we will move along the canyon to the place where the tank trucks are filled up with oil and after that black gold is transported to Nadvirnianskyi oil refinery. On the way, you can see the historic home of the Ukrainian liberation movement, where the legendary Ukrainian Sich Riflemen sotnyk (lieutenant of Cossack troops) Hryhoryi Holinskyi, who fought and died for our freedom, lived. Having reached the end of the village and walking around the houses without electricity and other benefits of civilization, we return to our comfortable residence.

Prutets-Chemehivskii River canyon. A stone canyon along the Prutets River stretches for many kilometres impressing with its beauty. Walk along the canyon, see its diverse nature, an extremely rich flora, which appears to grow in its stone walls. Stroll along the remnants of an old narrow-gauge railway once used for forest transportation.

Remnants of the Austrian dike. Klyauza (of German origin klause, meaning linn) is a hydro-technical structure, designed for the timber rafting by the Carpathians shallow mountain rivers.

We have breakfast in the morning and get back on our bicycles. The route begins near the bridge over the Prutets River. Have a ride to the Kostel cliffs along the river, but the paved road ends quickly. At this point, a tough ride to up the mountain begins. However, the berries that grow along the side of the road help us forget about these hardships. Proceed to Rokyta Mountain. Visit a kolyba (a Ukrainian shepherd’s cottage), meet shepherds and taste real Polonynian cheese and butter. Take inspirational pictures on the top of the mountain, feast on a delicious dinner and continue the ride through the picturesque mountain valleys to Makovytsia Mountain, downhill to Yamna returning to your accommodation.

Kostel (Kostol) Mountain. It is a gorgeous rock rising above the valleys.

Rokyta Mountain (1111 m above sea level). The weather being fine, almost half of the local territories and even its "gate", Kolomyia town, as well as Ivano-Frankivsk, the regional center of the Carpathians, can be seen from Rokyta mountain. Its powerful transmission tower is a distinct landmark visible from other peaks.

Makovytsia Mountain. Makovytsia peak and its slopes are damaged by trenches, dug out during the First and Second World wars as serious battles were held at these very places. On holidays, residents from the neighbouring villages go to Smerichok mountain to pray. Firing shells from guns and rifles can be found even nowadays. Nevertheless, locals found a clever application of cannon shot frames using them as anvils for hammering scythes.

We have breakfast and ride the path to the mountain ridge through the forest rich in berries and mushrooms. After a long ascent, we will ride to Lisniw mountain (1256m a.s.l.) surmount its peaks observing breathtaking mountainuous descents. Enjoy magnificent views of the Horhany and entire Chornohirskyi ridge.

Take memorable pictures. Before going home, we will have a farewell lunch. Екфтыаук to Ivano-Frankivsk.

Wonderful views. You will thrill with delight of incredibly overwhelming mountain forests valleys.

The Horhany. It is a system of mountain ranges in the outer lane of the Ukrainian Carpathians, located in Ivano-Frankivsk and Transcarpathian regions. It extends 75 km northwest of Mizunka and Rika valley to the south-east of Prut valley, and its width equals 40 km from the west to the east.

In your spare time, you can book a sauna session or visit a kolyba (a local restaurant), go to Mykulychyn artisan brewery and try craft beer. If you are into extreme sports, go quad riding, rafting by a mountain river or choose horse riding.

If you have no cycling clothes:

Clothing is desirable to be bright, or you should wear a reflective vest, so that the cyclist can be seen on the road for other participants.

In case of cold weather or rain:

Set of clothes for rest:

Be sure to have:

Prohibited during the tour:

It is not allowed to:

During the cycling trip, the accommodation is provided in green tourism hostel-type country estates with all the necessary conveniences (TV, WC, hot water, necessary furniture). The owners of the estate live nearby and have the right to comment on an inadequate resident’s behavior.

Males and females live in separate rooms (three to four people.). A couple can live in a double room.

Description of the cottage:

Travelling through the Carpathians on a bicycle will make you immerse in the atmosphere of picturesque mountains. This is the best choice to dip into the magical nature, fresh air of the Carpathians, beautiful environment of mountain rivers and forests, gorgeous places of Western Ukraine and local welcoming culture. Romantic appeal and vivid emotions are guaranteed in our Carpathian cycling tour!

The main components of a wonderful holiday are the following: a cycling tour with accomodation in the green tourism country estates with all modern conveniences and delicious Ukrainian cuisine. Interesting routes lying along the roads, trails and ridges will reveal the most beautiful corners of Ukraine, introduce you to the locals, help you relax and escape from the hustle and bustle of the urban everyday life.

The absence of mosquitoes and ticks, comfortable temperatures for cycling, healing air, spring water and forest berries along the way make it a pleasure to cycle. Everything is created for a good rest!